One of the reasons we moved to Costa Rica out all the many countries we considered is it’s prevalent culture of sustainability and conservation.  You can live in Costa Rica and be enslaved by consumerism, produce a ton of trash, and not give a hoot about the environment.  Fortunately, most people here don’t want to live like that, and the country has systems in place to make it easy to participate in an environmentally-friendly lifestyle…..for the most part.

Remember that Costa Rica is a developing country.  As a general rule, most people don’t have as much pocket money to spend on stuff.  Monteverde is significantly dependent on the tourist industry, and October/November are the slowest months of the year.  So people are spending their money on food, utilities, and the most essential items.  Much of the sustainability and conservation culture is economically-driven.   Tico’s adhere to the “reduce” philosphy because there is not a lot of extra cash to buy useless junk.  We have found it much easier to reduce buying stuff here because we have less money, we don’t have a lot of space in which to put extra useless junk, and there are not a lot of stores where we can buy stuff here in Monteverde (which can be a blessing or a curse!)

In Costa Rica, many household products and even food items are packaged using the least amount of plastic as possible.  For example, our liquid handsoap comes  in plastic bags, so you dont have to buy the entire hand pump system each time you run out of hand soap.  Jams, jellies, dulce de leche, and even milk come in plastic bags instead of the full containers.  That way you can just refill reusable containers each time with any of these products and reduce the amount of plastic that goes into the trash can.

I reuse things here that I never thought I would.  For example, I wash any plastic bags I get at the store to reuse for trash collecting and food storage.  I reuse ice cream buckets and other types of containers.  I return my CSA yogurt container each week to be reused as per their request.  I also return the rubber bands and plastic bags where the veggies are placed for reuse. 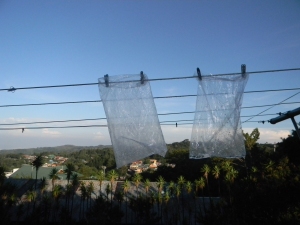 I am much better about reducing, reusing, and recycling here because I don’t have the option of just going to the store to buy anything I need.

Reusing is a bit simpler here because people tend to borrow or buy used things from each other.  When Kara and Tristan participated in the Costa Rican Independence Day parade, I borrowed Kara’s outfit from a student who had used it last year, and Tristan’s drum was made by a committee of teachers and parents.  They asked me to get him a set of drumsticks, and I proceeded to send him outside to find two solid sticks to bang on the drum.  In the USA, we are so isolated from people and obsessed with being judged by what we have, so we are not as comfortable borrowing stuff in efforts to reduce waste. 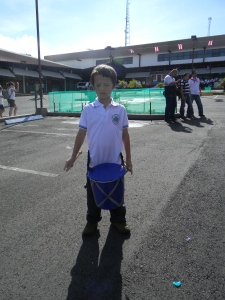 Tristan is ready for “Mini-Banda”

Kara and the Creativa banner

Many public places to where you travel in Costa Rica have clearly marked containers for trash, organic waste/compost, plastic, paper, aluminum, glass, and even electronics.  Unfortunately, these are not set up for the locals to use.  There is also no curbside recycle pick up.  So even though there is infrastructure to recycle, actually doing it is not easy for the citizens of Monteverde.   Once per month, you can take all your recycling to the Centro de Acopio, which is in a neighborhood about one kilometer outside of Santa Elena.  They ask that you take all your materials separated and cleaned.  This sounds like a piece of cake initially, until you take into a account that many of us don’t have a car and one-months worth of recycling can add up.  You either need to carry all the recycling up to the Centro de Acopio or take a cab to drop it off or hitch a ride from a friend with wheels.  I have found a nice way around this since my land lady owns a business that separates trash and recyclables.  With her permission, I just drop off my recycling there each week.  So you can recycle in Costa Rica, but you have to use a little muscle and ingenuity, as is the case with almost everything when living in a developing country.

What other ways can you think of to reduce, reuse and recycle?  Let me know in the comments below.

Noemi Gamel is a physician who prefers writing diverse children's fantasy stories instead of medical charts. She is a geeky nomad, too.
View all posts by Noemi Gamel →
This entry was posted in Living in Monteverde/Santa Elena, Simplifying, Sustainability and Eco-Friendly and tagged Culture of Costa Rica, expat, Monteverde, move abroad, redesign your life. Bookmark the permalink.